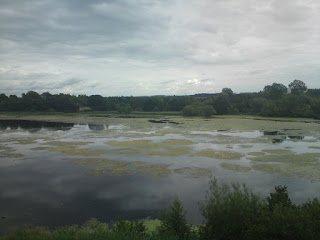 this is my photo of duddingston loch, which i run to often. i only discovered this whole area since moving back to this city, and now spend half my time up there. an owl swooped out at me last week, when the whole hill was shrouded in oppressive, comforting white fog.

meeting a minister in a couple of weeks to discuss recording album in south leith parish church: whole next album is sketched out in a notebook. it’s virtually recorded (in my head..)